The latest entry to the Visitations of 1663 is Warburton of Arley. This example perfectly illustrates the changes seen between the three Visitations carried out in Cheshire.

Warburton of ArleyArms: Quarterly of 6:
1, Argent, a fess between three cormorants Sable [Warburton]
2, Quarterly Argent and Gules, in the second and third quarters a fret Or [Dutton]
3, Argent, two chevronels Gules a canton of the second charged with a mullet Or [? Orreby]
4, Argent, an escutcheon voided within an orle of martlets Sable [Winnington]
5, Sable, a cross patonce Argent [Pulford]
6, Azure, a garb between two bezants in fesse Or [Grosvenor]

Crest: A saracen's head couped at the shoulders and wreathed around the temples. 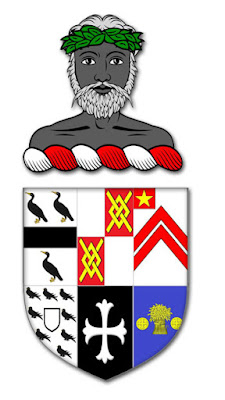 Here we can see the variations through the years with 1533 to 1580 on the left, 1613 in the middle and 1663 on the right. Full details of their respective blazons can be found on the main Cheshire Heraldry website. The 1663 arms finally show those of Warburton in the first quarter however, the chevron has become a fess and quarter three has gone from two Sable chevronels to three Gules and finally settling on two Gules chevronels. The Winnington quarter, quarter four, suffers from the usual confusion between an orle and an escutcheon voided. The changes in the crest are anybody's guess. 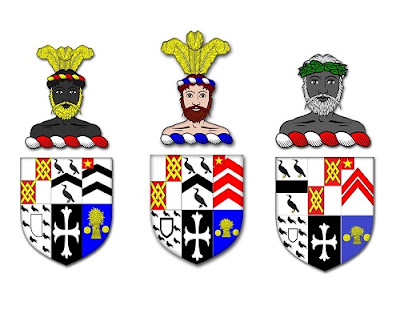