I have just turned down a very polite request to licence the name "Cheshire Heraldry" for commercial use by someone who thought it would be a good idea to start a small heraldry/surname franchise (a bucket shop) in Cheshire. The very polite initial enquiry asked if I would mind if he traded as Cheshire Heraldry!

Of Course I mind.  In its own small way, Cheshire Heraldry has, over an increasing number of years, become a brand in its own right and I have absolutely no intention of having that brand associated with the questionable activities of any heraldry bucket shop. I persuaded the would be business man that he would be most unwise to risk his investment funds by using the name Cheshire Heraldry as I would certainly sue under the common law tort of passing off; I have traded and published under that name for over 17 years. Whether I also succeeded in persuading him that he would have a clearer conscience if he embarked on a more ethical business venture remains to be seen.

While I was "talking" to my friend the would be business man I decided that, as a further protection to the name, I would incorporate Cheshire Heraldry as a Limited Company. I shall continue, for the moment at least, to declare the income I receive from Cheshire Heraldry as a sole trader and I shall use the limited company in its dormant state to hold any other intellectual property I might consider in the future. 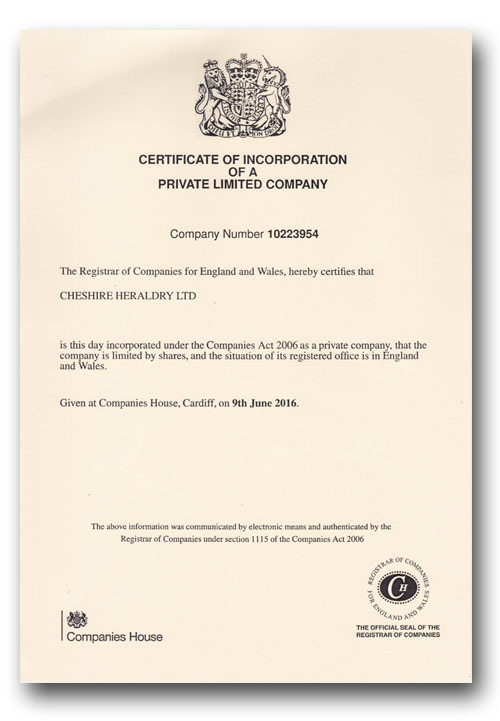