I just can't keep up with it any-more!

I can't keep up with it any more and I'm wondering why I should even bother.

On 23rd January 2014 I wrote on my Cheshire Heraldry Blog that I was shocked to learn that Andrew Stewart Jamieson had decided to lay down his heraldic paint brush and would no longer be taking any more commercial commissions to paint armorial bearings. Then, on 19th March 2015 I reported that it had been brought to my attention that Andrew Stuart Jamieson, who styles himself “Queen’s scribe and illuminator” had decided to return to the world of heraldic art. Now, it appears that we are back to square one with an announcement made by him on the 25th April (on his Facebook page) that he is no longer accepting commissions and has moved out of the field of heraldic art and into the field of fine art! 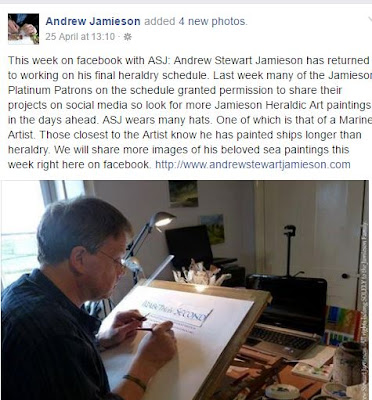 I think I'm probably repeating myself (hopefully for the final time) but I like Mr. Jamieson's heraldic work and his heraldry will be missed. Fortunately for those wishing to commission art work he isn't (or should that be wasn't)  the only good heraldic artist out there.