As a slight diversion from Cheshire heraldry, and a little closer to home, I had occasion today to produce a version of the arms of Prince, Abbey Foregate, Shrewsbury. 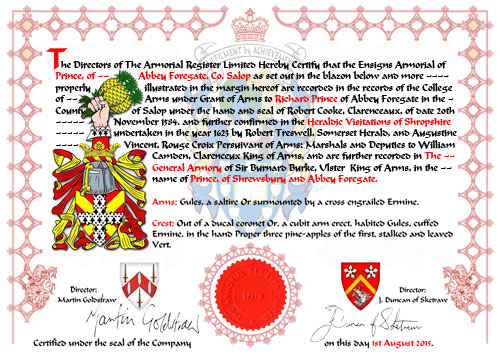 Grant of Arms to Richard Prince of Abbey Foregate in the County of Salop under the hand and seal of Robert Cooke, Clarenceaux, of date 20th November 1584 and further confirmed in the Heraldic Visitations of Shropshire undertaken in the year 1623 by Robert Treswell, Somerset Herald, and Augustine Vincent, Rouge Croix Persuivant of Arms: Marshals and Deputies to William Camden, Clarenceux King of Arms, and are further recorded in The General Armory of Sir Burnard Burke, Ulster King of Arms, in the name of Prince, of Shrewsbury and Abbey Foregate. 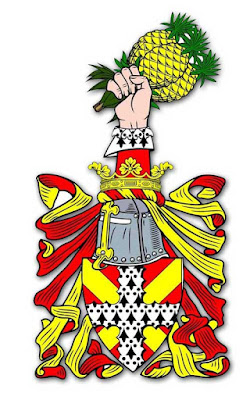 Arms: Gules, a saltire Or surmounted by a cross engrailed Ermine. Crest: Out of a ducal coronet Or, a cubit arm erect, habited Gules, cuffed Ermine, in the hand Proper three pine-apples of the first, stalked and leaved Vert.
at August 01, 2015