Way back in February 2007, The Leek Post and Times newspaper published an article titled 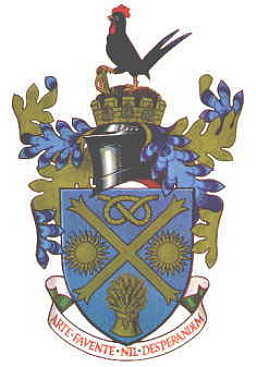 [quote] A LEEK man has got himself in a flap over claims that the town's crest features the wrong bird. Poultry expert Harold Critchlow says he has known for years that the armorial bearings of Leek Town Council depict the wrong animal standing on a mound of heather.

Mr Critchlow, who is a top 'panel A' judge of the Poultry Club of Great Britain, says the written crest the bearings were drawn from refers to 'a heraldic moorcock'. However, the bird shown at the top of the Leek crest is a black leghorn, which did not come to Britain until around 1903. The heraldic moorcock, or black grouse, is included as a symbol of the town as the bird lived on heather in the Staffordshire Moorlands.Mr Critchlow, who lives in Ashdale Road, Leek, said he had spent four years investigating the error.The leghorn shown on the crest is of Mediterranean origin and came to Britain via America.Mr Critchlow said: "The worst thing is that we call Leek the Queen of the Moorlands and we've got a Mediterranean bird on our crest.

"It's like drawing a sheep instead of a goat - it's that bad. "I've been studying poultry for years and am on the top judges' panel in the country. There's been a mistake and the people of Leek have never realised."

The 65-year-old has spoken to Leek Town Council and is now calling on members to change the bird. The crest was drawn in 1975 and the black leghorn emblem appears on several objects around Leek, including benches in Derby Street.However, the ex-farmer's claims have met with a mixed response from town councillors.Brian Johnson, who will become Leek's mayor later this year, said: "Harold came to the Leek In Bloom meeting last week and told me all about it."He's an expert in birds and he's got a point. I'll be speaking to town council clerk Julie Taylor about how we go about getting it changed."It won't be as simple as that though. There are proper channels to go through, as the armorial bearings were granted by the Heralds' College."

Leek artist and councillor Keith Harrison said: "I've painted the bird for a long time and took it to be a moorcock. I'd be surprised if it was wrong." Councillor Steve Povey said: "It's a really nice crest, the best in the area, in my opinion. "If it's wrong, it's wrong, but I can't see us altering it."

Mr Critchlow says he is willing to speak to anyone about the issue as he is convinced he is right. "This crest represents Leek - it has to be right," he said. "The written transcript clearly states there is a heraldic moorcock holding a small-weave shuttle, which obviously represents the town's industry.

"I'm not nit-picking, I just thought the people of should know." [end quote]

As an ex Leekensian and a Heraldry Addict, I felt that I ought to put Mr. Critchlow right. I have absolutely no doubt that, as a top flight poultry judge, Mr. Critchlow is well able to identify the difference between a Moorcock and a Black Leghorn however, in criticising the crest beast blazoned as a heraldic moorcock, he displays an unfortunate lack of understanding of heraldry. Heraldic beasts are quite different to their zoological cousins. Had Mr. Critchlow taken the trouble to open any one of a number of heraldic dictionaries he would have found the following description:

The Moorcock or Heathcock is curious, in as much as there are two distinct forms in which it is depicted. Neither of them is correct from the natural point of view, and they seem to be pretty well interchangeable from the heraldic point of view. The bird is always represented with the head and body of an ordinary cock, but sometimes it is given the wide flat tail of black game and sometimes a curious tail of two or more erect feathers at right angles to its body.

I do hope that this matter is now put to rest and both Mr. Critchlow and the Town Clerk and Members of Leek Town Council can sleep more soundly in their beds knowing that the armorial bearings of the Town of Leek are indeed properly depicted.
at March 16, 2015