The so called arms of a community have recently been brought to my attention via a discussion on Facebook. This illustration is taken from the website of http://www.culcheth.net/ 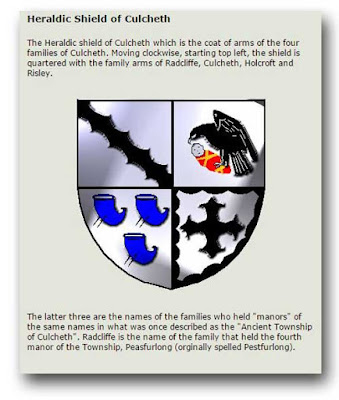 Since the webmaster describes the arms "clockwise from top left" let us look at them in some detail by number. 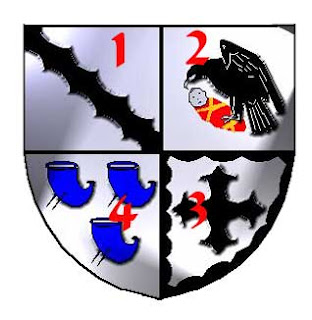 
The arms of Radcliffe (according to Burke's GA) are:


Argent, a bend engrailed Sable a mullet for difference.


So, what is emblazoned here isn't too far off with the mullet for difference simply ignored.


The arms of Culcheth (according to Burke's GA) are:


So, what is emblazoned here as number two clockwise appears to be a fair representation of the first quarter of the Culcheth arms.


The arms of Holcroft (according to Burke's GA) are:


What is emblazoned here is an incorrect interpretation of the blazon.


(A correct emblazonment can be found at http://cheshire-heraldry.org.uk/vale_royal/VRE11.html)


The arms of Risley (according to Burke's GA) are:


This coat appears to have provided the most difficult blazon for the webmaster to translate. Assuming that he has ignored the first and fourth quarters and chosen to depict the second and third quarters, then the images we see ought to be birds and yet it is almost inconceivable to believe that that is what we are looking at.


The "official" reason, at least that promulgated by The College of Arms, why villages can't have armorial bearings is that villages have no status as an entity; that is to say that a village is simply a small community or group of houses in a rural area so there is no entity, or corporate being, which could receive a grant of arms. That is why the College grants arms to Parish and Town Councils and not to "villages" or "Towns". The website with this made up and assumed coat of arms is Culcheth dot net however; there is another website Culcheth dot org which more correctly displays the arms of The Borough of Warrington upon the village gateway signs provided by the Borough Council. I don't for one moment think that the adopted arms illustrated at the beginning of this note have any wide support within the community itself and there appears to be some competition between the two websites as to which site actually represents the "village".**


Clearly the arms have been devised by a novice since they are described as "moving clockwise" and are poorly emblazoned anyway. The problem I have with the arms displayed on the Culcheth dot net website is that although they claim to be the arms of the village, there is no indication as to how they came about. If they are, as is claimed, the arms of "the village", were they the subject of a design competition? If so, who was consulted and what "organisation" took upon its self to undertake the consultation? In other words, just how representative of the views of the village are they? I suspect that they are the work of a one man community who has taken upon himself the very worthy task of filling a void and creating a village website but has overstretched himself by claiming arms which represent the whole community.


Perhaps, if it were properly represented in some form or other, the village might want to consider partaking in the recent initiative of  The Flag Institute referred to here: http://weblog.heraldryaddict.uk/2015/02/25/are-flags-armorial-in-nature/ 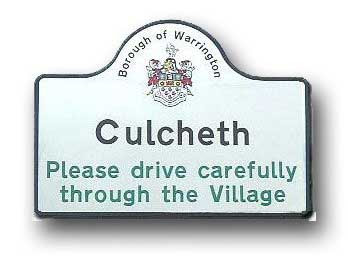 ** It may well be that very shortly the Parish Council will come onto the scene with yet another website because from April of this year councils in England with turnover not exceeding £25,000 should publish the summons, agenda and draft minutes on a website.