I'm sorry I never got to meet you.

Some time ago, Mrs. Martin was stopped in the street by a neighbour who asked her if it was I who had an interest in heraldry; Mrs. M replied in the affirmative and was informed by the enquirer that she knew of someone who knew of someone in the village who had recently died and amongst the possessions of the deceased lady were a number of heraldry books. Apparently the someone who knew someone had had a vague recollection that they had heard somewhere (probably from someone else who knew someone else) that there was another gentleman in the village who studied heraldry and so all the someones who knew someone else began to ask around until ... well, you get the idea.

Anyway, we thought nothing more of it until yesterday evening said neighbour, in her car, pulled up on our driveway with two bags full of books "I was going to walk up the road with these" she said, "but decided to drive because they were a little too heavy to carry far". She presented me with two carrier bags full of books: "We thought you might like these ... we didn't like the idea that they would just go to a house clearance sale". Needless to say, I thanked the good Samaritan, promised to find a good home for the ones I already had and pledged a donation to the charity of her choice. 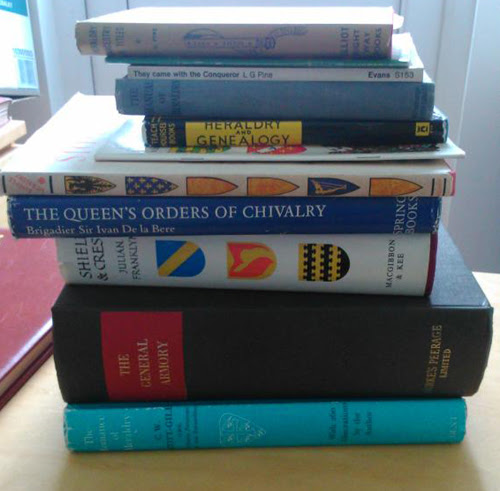 It seems that the lady was quite a keen student of the art and science of heraldry and many of the books contain newspaper cuttings of matters heraldic, one, from the Radio Times, dated June 24th 1949. 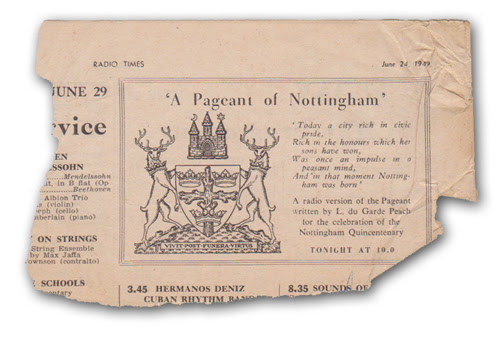 I'm delighted that my notoriety brought these books to my door but I can't help feeling just a little bit sad that for a great many years I shared a hobby and enthusiasm with an elderly lady living in the same village and I never had the chance to meet her.
at July 09, 2014