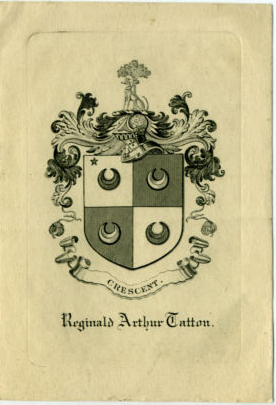 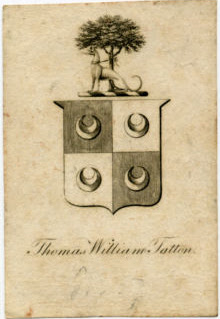 Two Tatton 19th century Armorial Bookplates. Neither is in the Franks Collection.

Reginald's plate not only bears a mullet for cadency but the tinctures are reversed.

There is a choice in attribution between father and son, both named Thomas William:

(1) Thomas William Tatton of Wythenshawe, Esq. born 29 Oct. 1783, High Sheriff of Cheshire, 1809, resumed by Royal Licence dated 9 Jan 1806 the name and arms of Tatton on succeeding to the Wythenshawe estates.  Died in London on 2 March 1827. He m. Emma, daughter of the Hon. John Grey, (He was 3rd son of Harry 4th Earl of Stamford and his wife Susannah, the daughter of Ralph Leycester of Toft) on 20 October 1807.  Emma died at Knutsford 28 April 1851, aged 69.  They had one son and eight daughters.  One of the daughters was Sophia Tatton who on 14 May 1840 married John Dixon of Astle.  The eldest sister, Emma Tatton, married on 24 Jan 1832 to Sir Harry Mainwaring of Peover. Bart.

(2) Thomas William Tatton of Wythenshawe, Esq. born 2 June 1816, High Sheriff of Cheshire 1848.  Died 1885. He m. Harriet Susan, (1819-1873) eldest daughter of Robert Townley Parker of Cuerden Hall, near Preston in Lancashire, on 25 Jan 1843.  She died in London.  The couple had three sons and a daughter. Through Harriet, Astley Hall in Chorley, Lancashire, passed into the Tatton family. The Townley Parkers had acquired it on the marriage of Harriet's grandfather, Thomas Townley Parker (1760-1794) to Susannah Brooke (1762-1852), the sole heiress of this branch of the Brooke family. 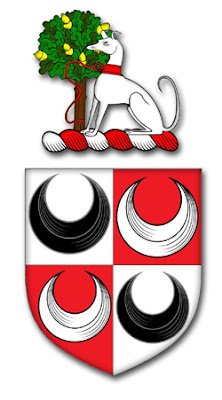 Tatton of Withenshaw
Arms: Quarterly Argent and Gules, in the first and fourth a crescent Sable, in the second and third a crescent of the first.
Crest: A greyhound sejant Argent, collared and tied by a line Gules to an oak tree Proper fructed Or.
at March 11, 2014