I am a great fan of the BBC's Antiques Road Show and take great pleasure when an antique catches my fancy. Last evening's Road Show proved to be an absolute delight when their second visit to Manchester Town Hall (an heraldic delight in its own right) turned up an armorial panel which used to be housed in Mottram Church but found its way by a circuitous route to a biscuit factory!

The company which is now the proud owner of the panel purchased an old cotton mill for use as a biscuit factory in 1980 and the panel was discovered when the junk left by the previous owner was being sorted out and disposed of. The panel has been hanging in the reception of the biscuit factory ever since its discovery.

Valued by the Road Show's Elaine Binning at between £12'500 to £15'000, the panel, said to date from 1694, is inscribed with the words " The South Side of Mottram Chancel is repaired by and belongs to the Earl of Warrington, as Lord of the Manor of Staly". Mottram Church is in the village or Mottram between Stalybridge and Glossop. 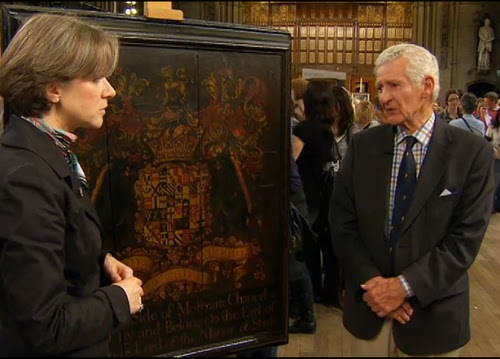 The company representative stated that the panel is thought to have hung in the chancel for about one hundred and fifty years until it was moved by a Mr. Chapman, a wealthy mill owner, who acquired ownership of the chancel in approx 1854 and felt that he was wealthy enough to remove all the existing accouterments in the chancel and replace them with his own; the panel disappeared at that time and it is thought that everything else in the chancel was simply destroyed! 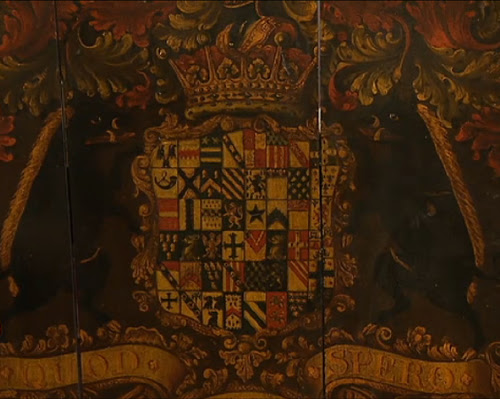 It's proud owner declared that it was not for sale.

These are the same 48 quarterings as those in the the armorial bearings of Booth which are displayed as a monument to Langham and Henry Booth seen in the Dunham (or Booth) Chapel at Bowdon Parish Church.