Some time ago I stumbled across a couple of Will's Cigarette Picture-Card Albums at our usual visit to a local antique fair; I paid six pounds for the two albums, which I think was a bargain. Both albums, at first glance appeared to be complete. The first album, The Arms of Companies, is complete but the second album, The Arms of Public Schools, has a cheeky duplication which lent the initial appearance of being complete. After I got home, whilst relaxing over the compulsory cuppa, I noticed that the card for Shrewsbury School was a duplication. After some online searching I discovered that the missing card is that of Edinburgh Academy. Now comes the quest to obtain the missing card! 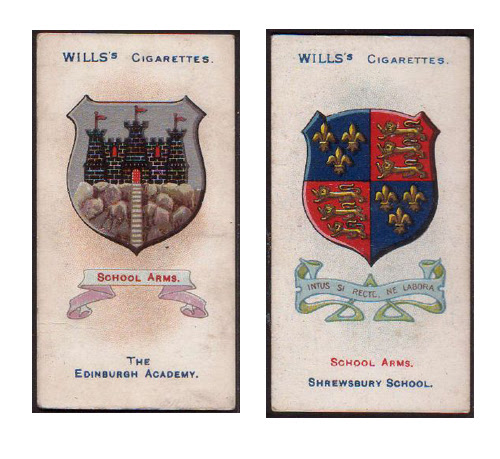 This series was issued by Will's Cigarettes UK in 1906.

I have a spare Shrewsbury School but need Edinburgh Academy to complete the set.
at February 14, 2012