Back in November last year I commented on the arms of Brereton of Ashley and find myself, because of an enquiry from a good friend of Cheshire Heraldry, with an excuse to publish a little more of my research. I have been asked if I have identified the quarterings in the arms of the Brereton Memorial. I have indeed: 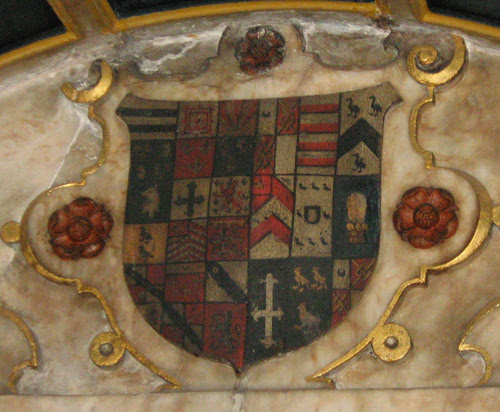 These are impaled arms.

It is believed that there is no real evidence to substantiate the descent bringing in the quarterings of the earls of Chester line.

* The charges on this quarter on the Brereton tomb do not admittedly look very much like pheasants, indeed they look more like cocks however quarters 6, 7 and 8 are brought into this family by an alleged alliance with Grosvenor of Caton and therefore this shield is undoubtedly that of Fesant.
at March 11, 2011