Following on from the post I made on the 24th April entitled "A Roadshow a Sheriff and a coconut" there has been a response from the incumbent Sheriff which doesn't actually throw any light on the conundrum. Her Worship appears to have attempted to answer the question but simply states that the chains of office of the Sheriff and his consort belong to the City of Chester's silver collection and are the arms of the Sheriff; which seems to illustrated that there is no real knowledge of the arms at all. The Sheriff describes the arms as "a chevron between three garbs; surmounted by an Earl's Coronet supported by a lion and wolf.

I have been asked if it is it only Cities that have a Sheriff, or do all local authorities have one?

I believe that the Sheriff of Chester, which is something of an honorary post, is elected from the members of the council by their fellow councillors. This minor local office differs from that of High Sheriff (the current High Sheriff of Cheshire is Mrs. D C Barbour); The appointments of High Sheriffs are (and I quote) "dealt with through the presiding Judge of the Circuit and the Privy Council for consideration by the Sovereign in Council. The annual nominations of three prospective High Sheriffs for each County are made in a meeting of the Lords of the Council in the Queen's Bench Division of the High Court of Justice presided over by the Lord Chief Justice on the 12th November in each year. Subsequently the selection of new High Sheriffs is made annually in a meeting of the Privy Council by the Sovereign when the custom of 'pricking' the appointee's name with a bodkin is perpetuated. Eligibility for nomination and appointment of High Sheriff under the Sheriff's Act of 1887 excludes Peers of Parliament, Members of the House of Commons, European Parliament or Welsh Assembly; full-time members of the Judiciary, including Special Commissioners or Officers of Customs and Excise or Inland Revenue; Officers of the Post Office; Officers of the Navy, Army or Royal Air Force on full pay." 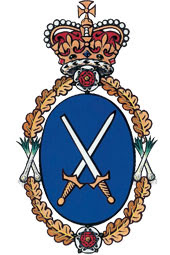 The official Badge of a High Sheriff

High Sheriff’s Badge
The Queen issued her Royal Licence and Authority for the Shrievalty Association to incorporate the Royal Crown in its arms and badge in 1991. There are only a few institutions which have been licensed to use the Royal Crown in this way and so this is indeed a very rare privilege. The Crown has an ermine border around its base to symbolise the judiciary.

The swords are in saltire (crossed in an x-shape), with the blunt sword representing Mercy and the sharp sword Justice. The Tudor roses symbolise England and the crossed leeks Wales. The wreath of gold oak leaves is representative of the national tree of England.

The official blazon of the badge is: “Two swords in saltire Argent hilts pommels and quillons Or that in bend couped at the point charged upon an Oval Azure environed by a Wreath composed of Oak Leaves Gold with in chief and in base a Tudor Rose Gules upon Argent barbed and seeded proper and in the flanks two Leeks in saltire also proper the whole ensigned by the Royal Crown proper.”

There is a general history of Sheriffs on line here:
http://www.british-history.ac.uk/report.aspx?compid=53761