Well, we now know what it looks like. Those whose heraldic horizons extend beyond the bounds of Cheshire may be familiar with the fact that in Scotland, following the abolition of feudal tenure, Lyon Blair stated that he would not be allowing any more baronial additaments to new barons but subsequently the new Lyon, David Sellar, stated that he would allow a baronial helm; we've all been waiting to see what it might look like. 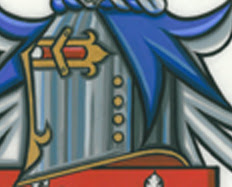