First off, I would like to say that I thoroughly enjoyed my monthly visit to the Cheshire Heraldry Society Lecture on Saturday even though I was suffering from the onset of a cold. The lecture was given by the Chairman of the society, Harold Storey and it was patent to see that not only was he knowledgeable on his hobby of collecting bookplates but also extremely enthusiastic. We were pleased to be shown numerous photographic slides which represented but a tiny fraction of his collection; a collection which began over fifty years ago when, after reading a chapter on the hobby in Lynch-Robinson's Intelligible Heraldry, he thought that as there couldn't possibly be anyone else collecting bookplates, he might as well be the first!

He soon learned that not only wasn't he the first, he was also a long, long way behind the real enthusiasts .... indeed, in the early days of his collecting, he was concerned that the cost of sevenpence ha'penny ( a tuppence ha'penny stamp, plus another enclosed on a stamped addressed envelope for the anticipated reply and then yet another on a thank you letter to those who had sent him a plate) might break the bank!

Judging by the size of his collection, not only wasn't he put off by the cost but I think he may well have caught the others up by now.

When we are out and about, attending lectures or just generally observing what heraldry is to be seen, we shouldn't always accept at face value and without question, what we see. Amongst the many examples of bookplates shown by Harold, I noticed one which, to me at least seemed to be rather strange in the way the label, denoting that the plate belonged to an heir apparent, was displayed. I questioned the chosen method of display and one of the Society's long standing members "strongly disagreed" - Harold kindly allowed some debate to take place but I am afraid that a combination of the heat of the room and the imminent onset of a heavy cold coupled with a respect for the member who challenged my view, meant that I simply did not have the will to press forward my argument and as a consequence I think that I may have failed to make my point at all clear.

On the basis that I am feeling a wee bit better and declaring that of course I will allow a right of reply if my views are once again challenged, I re-state my case here for all to see.

I regret that I don't have an image of the bookplate in question but it showed the cadency mark of a crescent (second son) upon which was displayed a label. I illustrate a "generic" example of what I saw below: 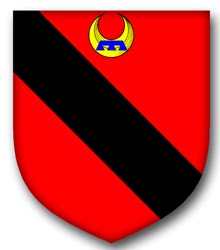 My instinct was that this was not a proper use of cadency and that this particular choice of display was wrong. It is my view that once an English armiger chooses to use a cadency mark to denote where he stands in the pecking order of the family, that cadency mark then becomes a permanent part of the arms; it therefore seems logical to me that his heir apparent ought to use the label in exactly the same way his cousin, who is heir apparent to the undifferenced arms, would.

Unlike all the other cadency marks, which are permanent, the label is not permanent and its function is to boldly bebruise the arms of the father during his lifetime.

Once an armiger has decided to use cadency marks to mark his place in the family he has in effect created an entirely new set of arms; the arms of a cadet branch of the family. It is a perfectly proper rule, though proven to be unwieldy in practice, to place one cadency mark on top of another to denote, say, the third son of a second son of the house. To see a martlet on top of a crescent would be perfectly proper but to include a label in this scheme, is, in my view at least, silly.

Once the second son has created his new coat of arms thus: 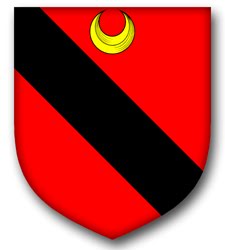 His heir apparent should use a label thus: 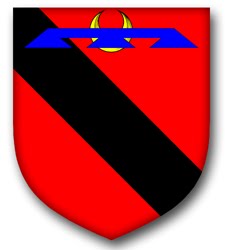