The Chief Herald of Arms of Malta has just sent a round robin email to all who have expressed an interest in his activities alerting them to his "New Look Website" which has details of not only recent grants and registrations but also his registration of hereditary honours.

I have a number of concerns and begin to wonder about the ability (or desire) of the Chief Herald of Malta to check the facts provided by applicants prior to making his grants or registrations. One in particular stood out, that of O'Sullivan recorded in the hereditary honours section:

A check on the grants/registrations page provided this image: 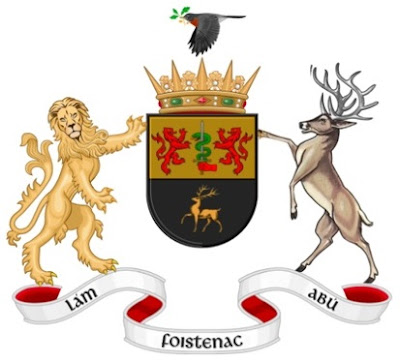 Image screen shot from the Maltese website 25/07/22
A quick check in Burke's General Armory provided me with a blazon for the arms of O’Sullivan and O’Sullivan Mór and it came as no surprise that the arms granted/registered by the Chief Herald of Malta are different. 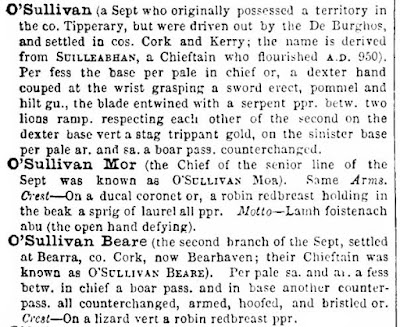 A further check in MacLysaght's book "Irish Families, Their Names, Arms and Origins", confirms that the true blazon for the O’Sullivan Mór is that given by Burke and not the arms granted/registered by Dr Gauci (no supporters either). I then had a conversation with a friend in The Genealogical Society of Ireland (Irish: Cumann Geinealais na hÉireann) (a voluntary non-governmental organisation promoting the study of genealogy, heraldry, vexillology and social history in Ireland and amongst the Irish Diaspora) and we both came to the same conclusion. 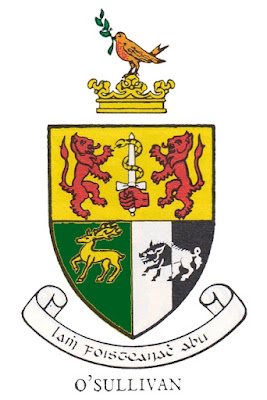 We both felt that when faced with a petition for arms from a person claiming to be an Irish Chief and bearing the titles Count of Knockgraffon and Prince of Munster it would have been sensible to have contacted his counterpart in Ireland to ascertain the veracity or otherwise of such claims linked with the territory and jurisdiction of the Chief Herald of Ireland. Had he done so (it is actually quite unfathomable that a Chief Herald would not be aware of this), he would have been informed that the "courtesy recognition" of Irish Chiefs and Chieftains was discontinued by Chief Herald Brendan O'Donoghue in 2003 following "The MacCarthy Mor" scandal - see: Irish Chiefs: Contents (eircom.net)

The inclusion of the "Prince of Munster" and the "Count of Knockgraffon" is laughable given the scandal mentioned above.  Ireland, just like Malta, is a Republic - in both jurisdictions no such titles of nobility can be recognised by the State under the Constitution.

If the gentleman was genuinely entitled to the arms of O’Sullivan Mór then, regardless of the fact that The Chief Herald of Ireland would not be in a position to recognise his honours and titles, he ought nevertheless to be in a position to prove his right to the undifferenced arms of his ancestors. In eschewing the Irish Office of Arms and instead choosing to swim over to Malta, it would seem that the petitioner now has "official" recognition - for what it is worth!

I fear that The Chief Herald of Arms of Malta is allowing himself to be used.