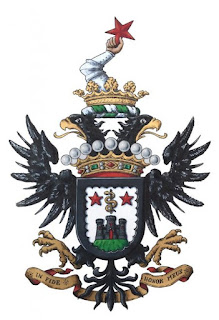 In a post today on the International Society of Commoners Heraldry forum (Face book) Laird Sky kindly lets us know that he has contacted Dr Gauci to ask for his opinion on events thus far.

I was amused to see the amount of “spin” so I have taken the liberty to dissect it and add my own take to his comments [in parenthesis].

“I was curious as to Dr Charles Gaucci's [sic] opinion on this matter so I emailed him last night. What follows are his personal insights on the new Act-

1. PM & Cabinet appointed me [This appointment of course had no effect as it was ultra vires however, I have no doubt that until I raised my concerns with him soon after (a concern which was dismissed by him and referred to Heritage Malta's legal counsel to “see me off”) I am content to believe that he mistakenly believed that he had some form of authority to act however, I contacted him within weeks and informed him of the fact that the Act providing powers to Heritage Malta did not allow for ad hoc appointments and the Minister needed to table a paper before Parliament to effect any changes to the Act (something which, over a year later they have now done but we still, as yet await powers to be granted).]

2. I wanted to see whether the idea would take off before suggesting a change in the law [hmm. This is almost risible, Right from the beginning, Dr. Gauci has maintained that he had the authority to act as Chief Herald and shortly after my intervention his web pages, on the Heraldry Malta website appeared with a lame and wholly misleading attempt to justify the existence of the office in law. Later, after I had contacted the office of the Ombudsman, I was asked to comment on the assertions on that website and provided a forensic criticism which proved that there was no basis in the Cultural Heritage Act for such an ad hoc appointment by the Prime Minister or Cabinet.]

3. It was a resounding success [I am sure it was however, it had no basis in law and yet the so called Chief Herald continued to mislead his clients that his office was lawful and that he had lawful authority to make grants and registrations. The success was based upon a falsehood.]

4. I suggested a change in the law. This was agreed by government. The Cultural Heritage Act was specifically changed. [It was actually I who right from the beginning suggested to Dr. Gauci and his boss, the Chief Executive of Heritage Malta, that his appointment was ultra vires and that he needed to ensure that the Minister for Culture tabled a paper before Parliament to ensure that proper legislation was in place. I kept asking him to justify his assertions that his office was lawful and asked if he could point me to the legislation (knowing that there wasn’t any): My approach to the Chief Herald was not appreciated and he put the phone down on me so I wrote to his boss pointing out the law as it stood and stating that proper legislation needed to be put in place. So, he can't really state with any truth that it was he who initiated a change in the law; he would have been happy if no one had noticed and he was allowed to "carry on granting".

5. The new law created my Office [Agreed, the new law, passed in July 2021 allowed Heritage Malta to create the Office of Chief Herald, however, as noted by the Ombudsman there is as yet no provision for powers ("This Office observes that the proposed Bill does not include an amendment to specifically regulate heraldry, including the creation of new arms"). And yet, the Chief Herald still writes to those who enquire informing them that he has full powers to grant and register arms!]

6. Secondary legislation has been drafted which details ALL my "powers" and which merges the existing office with the "new" office and which recognises all creations/legislations to date. [If this is true, and I can only hope that it is, then this is indeed good news]

The secondary legislation should be law in a very short time, once it is translated into Maltese!

In any democracy which has an Ombudsman, the latter suggests but does not legislate. This is the job of the government. He made his suggestions and they were duly noted. They have all been dealt with in the secondary legislation which, incidentally was being drafted long before the Ombudsman reported. [The legislation was of course being drafted long before the Ombudsman made his suggestion however, it is disingenuous to lend the impression that this drafting was not as a result of the Chief Herald and the Minister being aware that they were under investigation by the Ombudsman and having been provided with a copy of my forensic examination of their false claims. Legislation was begun because they became aware that they were being investigated by the Ombudsman.]

I really have not the slightest interest in 'others' opinions. [This is par for the course for someone who has throughout misled all who would listen into believing that firstly his office existed when he knew that in law it didn’t and secondly continued throughout to maintain that he had lawful authority when he didn’t - as yet, he still doesn't.]