Sometimes, I hit a brick wall and this evening was one of those times. I am coming to the end of the letter L in the Funeral Certificates and have a few outstanding arms to complete, one being the arms of Mrs. Elizabeth Leigh, daughter of Thomas Edwards of the Mould, in the County of Flint, gent. I'm saving that one up until I can pluck up the courage to spend time doing a complicated image. However, the one that has really frustrated me is that of John Lloyd, L.L.B., who died in 1608. The only description of the arms is "A trick of arms. On a chevron between three dolphins nowed an annulet." I don't have the luxury of seeing the actual trick and the written description isn't helpful, not only because it doesn't give tinctures but also because the dolphins are described as "nowed". This is an unusual attitude for a dolphin (it means tied in a knot; frequently applied to serpents and the tails of beasts when knotted) and I am wondering if it should actually be naiant which is used to describe fish swimming horizontally across the shield (and yes, I do know that a dolphin isn't a fish!). The default posture for an heraldic dolphin is naiant and they are typically drawn embowed or embowed counter-embowed.

Sadly, neither Google or Burke's General Armory are helping as I can't find a Lloyd amongst the many in Burke's with a dolphin coat. 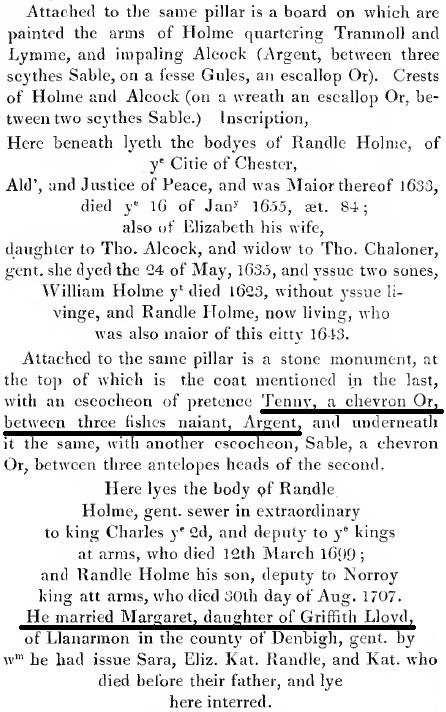