Although I have tried my very best to keep up with what’s happening with the Office of the (so called) Chief Herald of Arms of Malta, it has recently been brought to my attention that while its legal status is being investigated by the Maltese ombudsman, the Office of the Chief Herald of Arms of Malta has published a document on the System of Maltese Heraldry on its website. This document is undated but was evidently drawn up within the past three or four months.

One commentator has stated that “This document provides interesting insights into the OCHAM's policies, and includes an appendix explaining basic heraldic principles, and rules of blazon, aimed at lay persons. There's a strong emphasis on English practices (including some which the College of Arms has abandoned).”

I will leave it to my reader to digest the full implications of the “System” by clicking on the link which will take you directly there however, I would like to point out that in his allegedly official capacity Dr Gauci is so ignorant of his own country’s laws that he is quite happy to publicly declare that not only will he will accept and register coronets of rank (and supporters of the nobility) but he has also invented his own coronet for “untitled nobility” despite the fact that Chapter 251, Laws of Malta. Article 29(4) states: It shall be the duty of every public officer or authority, and of every body established or recognised by law and of every member thereof, to refrain from recognising in any way, and from doing anything which could imply recognition of, any title of nobility or any honour, award, decoration, membership or office which is not recognised in accordance with the foregoing provisions of this article. 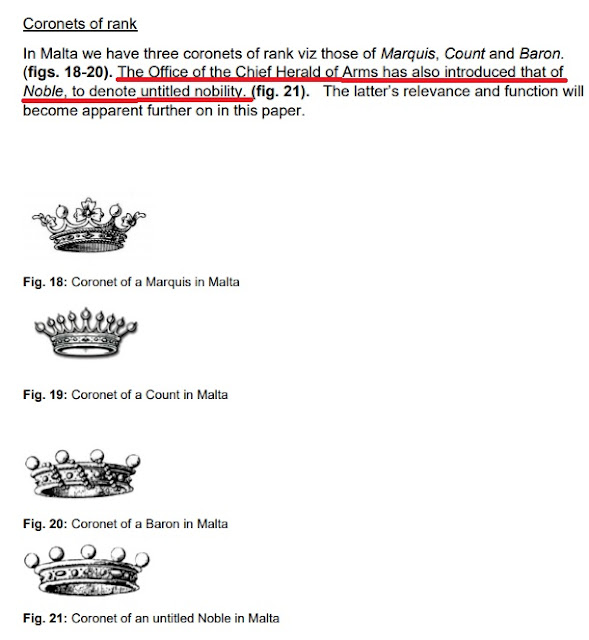 When will this man realise that Malta has laws and its laws should be obeyed?