In the the third group, wherein part of the bearer's name is shown by the charges, another example is that of the crest of an ass's head displayed by Aston of Aston. 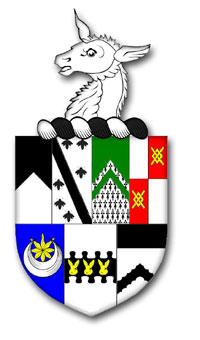 Aston of AstonArms: Quarterly: 1. Per chevron Sable and Argent.2. Argent, a bend between six bees volant Sable. [Beeston]3. Per chevron Vert and Ermine, a chevron engrailed counterchanged. [Stoke].4. Quarterly Argent and Gules, in the second and third quarters a fret Or. [Dutton].5. Azure, an estoile Or, within the horns of a crescent Argent. [Minshull].6. Argent, on a fesse nebule Sable, three hares' heads Or. [Hanwell].7. Argent, a chevron engrailed Sable, a chief of the second.Crest: An asses' head couped Argent.