Son and heir to George Hope of Dodleston. He died in his father's lifetime.

Arms: Quarterly of nine: 1, Argent, a chevron engrailed Sable between three birds [storks?*] ... beaked and legged Gules; 2, Gules, three uncorns' heads couped Or [Paris]; 3, Azure, a chevron between three fleurs-de-lis Or, on a canton .... two roundles ... [?]; 4, Argent, two bars Gules, each charged with three bezants, a crescent for difference [Martin co. York]; 5, Per bend sinister Ermine and Ermines, a lion rampant Or [Edwards]; 6, Azure, a lion rampant Argent, within a bordure of the second; 7, Or, a lion rampant Gules [Wale?]; 8, Or, a lion rampant Gules within a bordure of the second; 9, Azure, three boars passant in pale Argent; over the first three quarterings a label of three points Vert. 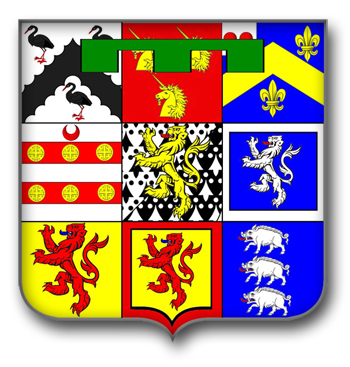 *In the Funeral Certificate for Mrs. Katherine Davenport, 1634, the birds are recorded as herons or stalks [storks].
I have yet to identify the quarterings and until I do, there are a number of uncertainties about this achievement. In the first quarter, although the arms recorded for Mrs Katherine Davenport have the birds recorded as herons or storks, the nearest match in Burke's G.A. is that of Hope (Grangefield co. Derby) Argent, a chevron engrailed Sable between three Cornish choughs proper. In quarter three, the tinctures of the canton and the two roundels are not specified so I have made a complete guess until I can research the matter further.