Heraldic Puns abound in Cheshire - Calveley of the Lea

George Calveley of the Ley

2 Argent, on a bend sinister Gules nine annulets interlaced in threes, Or [Hawberk]

Crest: Out of a ducal coronet Or a calf's head Sable.

Continuing our sojourn around the puns in Cheshire armorial bearings, a fourth group might consist of shields whose charges are objects, the name whereof is part only of the bearer's name, combined with an ordinary. The arms of George Calveley of the Lea, as one example, would fit into this category, with arms of three black calves in a silver field having a red fesse between them, while his crest of a black calf's head erased and collared with a golden crown is equally an example of canting heraldry. 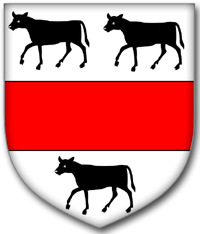