One of my favourite puns, not included in the Visitations of Chester but recorded in Burke's G.A. and recorded in  The Vale Royal of England, first published by Daniel King in 1656, is that of Croxton who placed two tuns between three crosses to illustrate his name. 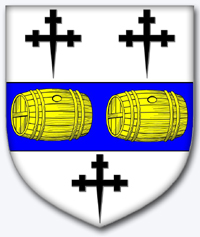