The last of the Brereton entries in the Funeral Certificates has now been completed ... phew. 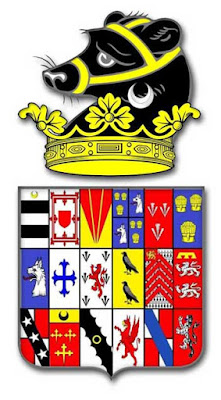 William Brereton, Esquire, 1630.
Arms: Quarterly of 18: 1, Argent, two bars Sable, a crescent Or for difference. 2, Argent, an inescutcheon within a double tressure counterflory, Gules. 3, Or, three piles in point, Gules. 4, Quarterly 1 and 4 Azure three garbs Or; 2 and 3, Azure, a wolf's head erased Argent. 5, Gules, three pheons Argent. 6, Azure, three garbs Or. 7, Azure, a wolf's head erased Argent. 8, Argent, a cross flory Azure. 9, Argent, a lion rampant Gules between six pheons Sable. 10, Or, two ravens Sable. 11, Ermine, five chevronels Gules, on a canton of the second, a lion passant Or. 12, Gules, two lions passant Argent, a label of three points Or. 13, Quarterly Argent and Gules on a bend Sable, three mullets of the second [first]. 14, Gules, three cross crosslets fitchee Or, on a chief of the second, a crescent for difference Sable. 15, Argent, on a bend engrailed Sable an annulet Or. 16, Argent, a griffin segreant Gules. 17, Quarterly Argent and Gules, a bend Azure. 18, Gules, a lion rampant per pale Ermine and Ermines.

Crest: Out of a ducal coronet Or, a bear's head sable, muzzled of the first, a crescent for difference.
at January 29, 2018