A few days ago I added image of Venables, baron of Kinderton to the 1663 Visitations webpage and made an entry in my weblog:

Since then, I have had word from Cheshire Historian Tony Bostock who is presently assisting with The Middlewich Heraldry Project, a project to restore the Venables' Screens in St. Michael's Church in Middlewich, who has obtained, from the British Library, details from two MSs  one of which includes an image of the Venables arms.

Here is what Tony said:

"Thought you might like to see the attached which I received from the BL yesterday as part of the Middlewich Heraldry Project.

It is from Harley MS 139, f. 140. It was recorded by Laurence Bostock from the original Letters Patent issued by Norrey on 30 October 1560 to Sir Thomas Venables. Harley MS 1116 has another copy of the grant made on the day of issue and authenticated by Richmond and Rouge Dragon but without an illustration. Quartering three is given as an augmentation and four as Eccleston. I am just transcribing the text of the Patent.

You might note that the child is positioned in the dragon’s mouth feet first: the crest is described thus:

This throws light on many of the tinctures of the crest and it is interesting to note that quarter three, the wyvern coat, is an augmentation. 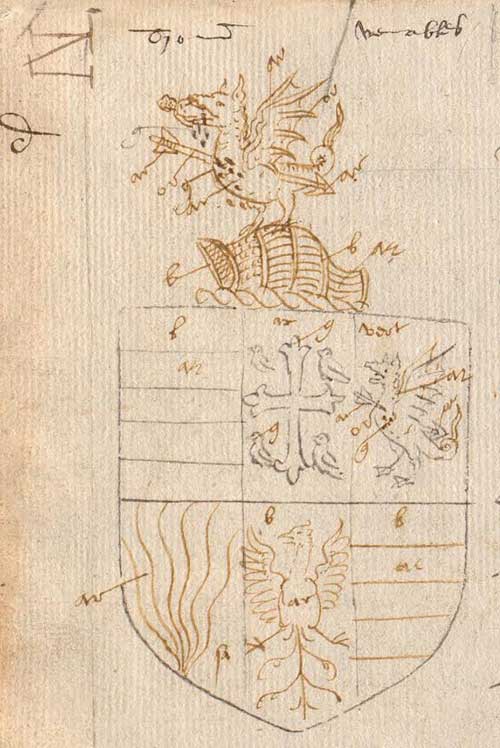 I am most grateful to Tony for obtaining the information.

Details of the augmentation of the crest (but no mention of the coat) found in The History of the County Palatine of Chester by J. H. Hanshall.

This extract from  "Supplement etc." by William baker Daniel. This indicates that the "Dragon" is in the arms as well as the crest. 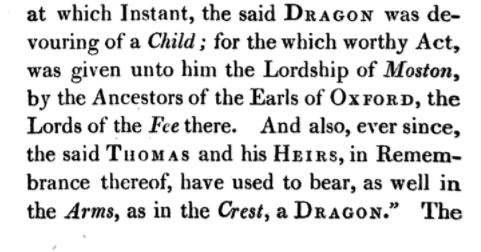