As my reader will know, I'm spending as much time as I can nowadays at the seaside in Tywyn (Merioneth) and one of the things I notice when visiting Wales (it's the same in Scotland) is the preponderance of the national flag when compared with those flown in England, where we only tend to see the appearance of the English flag when there is the usual run of International football matches on the goggle box (and the odd one appearing on or around St.George's Day) and even then, for some inexplicable reason, it appears to be necessary that the actual word "England" is emblazoned upon the flag; possibly as a safeguard to ensure that it is identifiable as our national flag because we see so little of it.

When we drove down (or should that be across?) to Tywyn last weekend our route was noticeably strewn with Y Ddraig Goch, the national flag of Wales; it was the week of the National Eisteddfod which is the largest cultural event of its kind in Europe and takes place annually during the first week of August. This year it's being held in Meifod, Montgomeryshire, between 1-8 August.

The Welsh are not shy when it comes to flying their national flag and seeing all of those flags on our journey reminded me of the row over the replacement of the Welsh flag with one designed to represent the town of Tywyn by the Tywyn Tourist Organisation. I remember thinking at the time that at least they were flying a flag which is more than can be said for the majority of English towns. 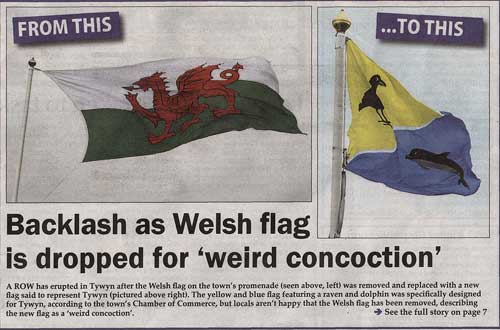 While on the subject of flags, of which Tywyn should be commended, the Parish Church of Saint Cadfan, Tywyn, which contains the oldest known example of written Welsh, often flies the flag of Merioneth at the same time as the National flag of Wales. 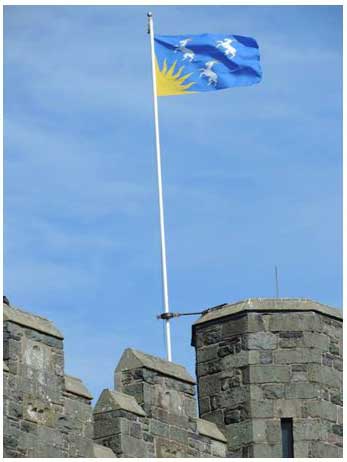 Whether it's a "weird concoction" or a national flag is, perhaps, somewhat irrelevant, the important thing is that at least there is a flag and it's being flown. Others could learn a lesson from such proud displays.
at August 07, 2015