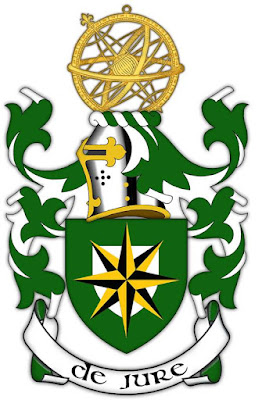 The newly adopted arms of the International Heraldry Society with the motto De Jure (by right).

Most people have some sort of design rational behind their arms and I suspect that their published rational is a slightly romanticized, edited, version which belies the reality. Here is a straight forward honest, if somewhat tongue in cheek, design rational provided by Kathy McClurg, Committee Member of the Society:

"So - John mentioned "design rationale" yesterday. Chas doesn't see a need for it.. I thought I'd "play" with it...
The shield is Vert because Kathy likes Vert and didn't have any yet. Since Chas put lots of effort into the compass rose and Martin thought it was too .. not compass rose-like, John found one online with a circle behind it and suggested the circle be made a shield... which played in nicely with an earlier comment by Martin saying he didn't think much of the arms said "heraldry" to him.

The astrolabe or celestial globe or ?? was suggested by Martin or Chas or John. But Chas located a graphic he could work with and produced it.

Richard was somewhat unavailable during a number of the discussions but hopes a simpler celestial globe is rendered if an artist takes it up with us... ;-)

The motto was ultimately first recommended by Martin while we completely ignored Ralf's poll. Kathy thought "du jour" as in soup? And Martin and Chas thought she was strangely making the connection to French rather than Latin and laughed at her most joyously... Martin posted the suggestion for the IHS FB page... and when no one commented, Chas and John jumped it - and it was done!"