An artist returns to the fold.

It has been brought to my attention that Andrew Stuart Jamieson, who styles himself "Queen's scribe and illuminator" has decided to return to the world of heraldic art. 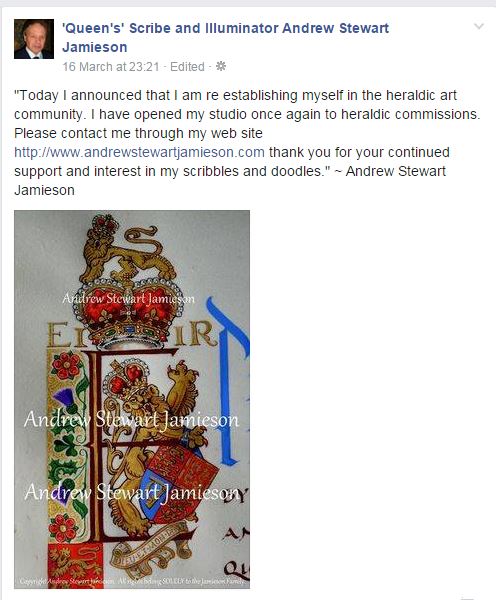 Image courtesy of Facebook and used as permitted under the copyright laws of fair reporting.

My reader will recall that I wrote of his departure back in January 2014  and at that time, I felt that it was quite sad that he had thrown in the towel. I have always been very fond of the fine artistic skills he is fortunate to possess and his heraldic artworks have given pleasure to a great many with his distinctive style often copied but seldom bettered. I sincerely hope that he has been able to put behind him those difficulties which appeared to have beset him just over a year ago and that we, in this narrow and rather confined world of heraldry enthusiasts, will begin once more to see his work displayed for all to enjoy.

In regard to the self assumed title of Queen's Scribe and Illuminator, Andrew himself admits that the "title" is not official. In my humble opinion it is boastful, misleading and entirely incorrect for anyone not holding a commission or warrant or in the direct employment of Her Majesty to make the claim that they are the Queen's anything.

It is probably unnecessary to remind you dear reader that the only official holder of a Royal post in the artistic heraldry world, as far as I am aware, is Sally Mangum who has a Royal Warrant and is therefore fully entitled to say that she is Calligrapher to Her Majesty the Queen.

Quote “Calligrapher Sally Mangum has a way with words—she makes them beautiful, and surrounds the letter forms with richly colored designs. And she does this for some of the most prestigious customers in the world, including the British Lord Chamberlain’s office.

As holder of a “royal warrant” for calligraphy, Sally displays the royal coat of arms on her business cards and letterhead. But she doesn't advertise, as referrals bring her business.”

That said, welcome back Andrew.