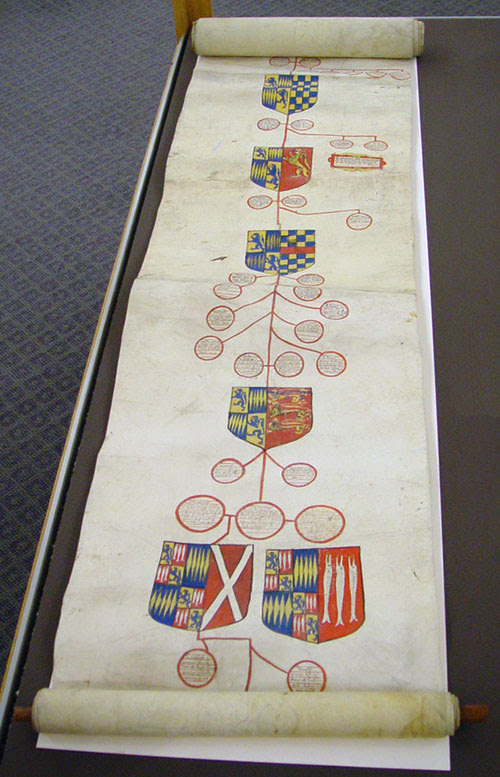 This spectacular 20 foot-long heraldic roll was commissioned to enhance the pedigree of the Fittons of Gawsworth, a family whose fortunes were on the rise - they were knighted in 1566 and would be made baronets in 1617; the last member named, Mary Fitton (1578-1647), was to become a maid of honor to Queen Elizabeth, and “the Dark Lady” of Shakespeare’s sonnets, while her brother was Treasurer of Ireland. According to this genealogical tree, the Fittons are related to the Earls of Northumberland and via them to the royal house of Plantagenet and to William the Conqueror. This fantasy was made possible by the marriage of Sir Edward Fitton of Gawsworth (1500-1553), High Sheriff of Cheshire, with Mary Harbottle, daughter of Guiscard Harbottle of Northumberland, himself the son of Margaret Percy. This Margaret Percy was the great-grand-daughter of Lord Marshall Henry Percy (1341-1408), who was the son of Mary of Lancaster and thus the great-great-grandson of King Henry III of England. Indeed, the rich heraldic material includes the “three golden lions on a red background” of the Kings of England, adopted by their cousins the Earls of Lancaster (with the addition of a label of three points azure, each point charged with three fleur-de-lys or). Richard the Lion-heart had been the first to use three lions for his seal, and the ambitious family from Gawsworth, in the County of Chester, incorporated them into their coat of arms. 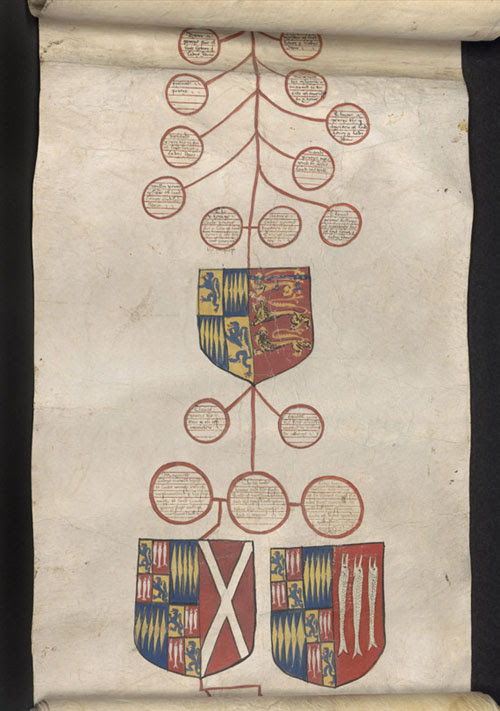 Thanks and Credit to Division of Rare and Manuscript Collections, Cornell University Library.
at October 31, 2014

Remember Remember the fifth of November ..