In and around Cheshire - Macclesfield

Yesterday I had the pleasure of whiling away an hour in the company of Charles Burnett, Ross Herald Extraordinary, prior to our lunch with other officers and guests of The Cheshire Heraldry Society. Mr. Burnett was to be our speaker later in the afternoon and I had met him off the train at Macclesfield with time enough to spare for a gentle walk around the town. One of the heraldic sites we looked at was the façade of the former Chadwick Free Library with the arms of Chadwick. 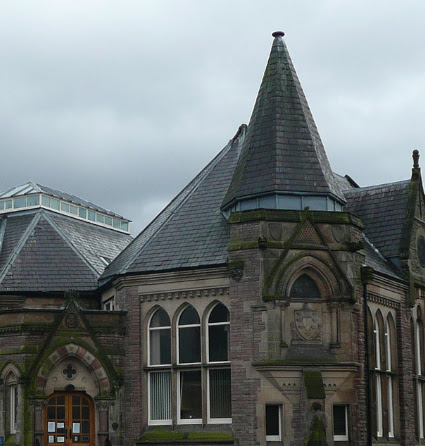 The Chadwick Free Library, which since its closure in 1994 has been the town’s Register Office, was built in 1874/6 as a gift from David Chadwick, MP. It was designed by the local architect, James Stevens, and opened on 27 May 1876.

The armorial bearings on the façade are carved extremely well in Petra Sancta and conform to the entry in Burke’s General Armory for the arms of Chadwick, County Lancaster, viz: Gules, an inescutcheon within an orle of martlets Argent, with a crest of A lily Argent, stalked and leaved Vert. The topic of the talk given by Mr. Burnett was The Heraldic Commemoration of Death which was extremely well received by an appreciative audience.