Armorial Bookplates sold for £1.12 each.

I have been following with interest the sale, on Ebay, of an album of armorial bookplates. With a starting price of just 99p (It was always going to sell for far more than that) the album was described as "Ex Libris Album 135 x Bookplates C19th Early C20th British & American".

The vendor described it as an album (10" x 8") of approx. 135 Bookplates dating mainly from 19th & early 20th Centuries. The album belonged to one Edith Oldham 1855-1946 and seems to have been handed down to F. Oldham with the date 1962 on the inside front cover. The album is broken and the contents range from poor to good condition with many old sellotape stains and several plates with missing corners. The bookplates were said to be thought to originate from the UK with a proportion from the USA plus the odd European example. They consist of armorial designs and later pictorial images. 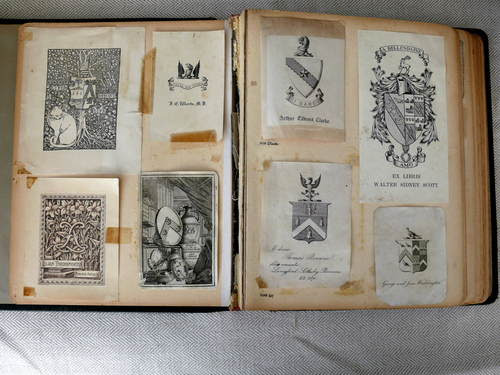 With seven bidders making ten bids the hammer fell at £148.77 plus £4.50 UK delivery. Assuming that the winning bidder resides in the UK that makes an average price of £1.12 per bookplate. I wonder if it was purchased by a dealer who will now split them up and offer them for sale individually?
at July 28, 2013

Email ThisBlogThis!Share to TwitterShare to FacebookShare to Pinterest
Labels: Bookplates, Heraldry under the hammer (sold)