My first post of the New Year reports two sales on eBay which may be of interest to armorists. The first is the sale of the Letters Patent of a grant from the College of Arms to Oswald Milne of Prestwich Lancashire which fell under the hammer for £335 (plus £11 post and packing) with interest from five bidders, the winner sniping a bid within the last few seconds to secure it. 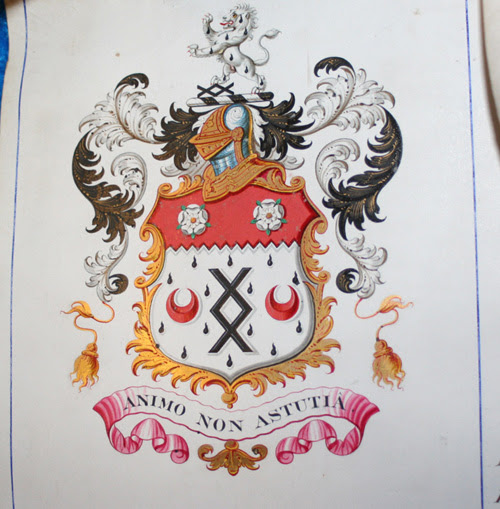 Described by the seller as being a “Cased hand written and illuminated scroll, bestowing the right to bear a coat of arms. The box is embossed with Queen Victoria's initials. The scroll has two wax seals in gilt metal cases. Beautifully done, and in excellent condition, with just a little wear to the box. Included is the original receipt for £85, 18 shillings, a huge sum at the time, 1867.”

The seller included a photograph of one of the seals which appears to be that of Sir Charles George Young (1795 to 1869) who served as Garter from 1842 until his death. 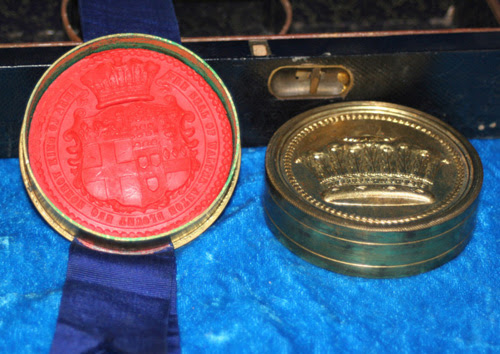 The second item of interest fell had a certain familiarity with it in that I have a feeling I have seen it (or another of the same) offered for sale before but can’t be entirely sure. Described by the seller as an “Antique HERALDIC Crested Brass Cased ~ WAX SEAL ~ 1800s” with the “remains of a silk ribbon to the back” and sitting in its own brass case it is an ornate heraldic crest believed to be c1800. The item was stated as having a discreet crack to it, but otherwise very good order.  The seller professed to have no idea as to provenance but welcomed any input and felt that it must have value to have been cased and saved. 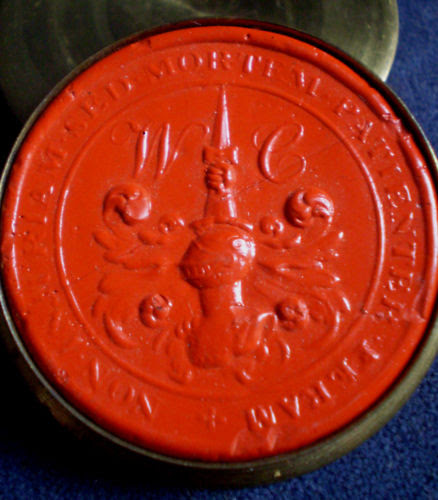 Two bidders fought hard over the period of the auction with the winner securing it for £29.99 (with £2.95 delivery).

Have a Happy Heraldic New Year.