Where there is a discrepancy between blazon and emblazon, which is the more important? It is a conversation often held between armorists and relates almost entirely to ancient arm and really not at all to modern arms which have letters patent setting out the details of the grant. With ancient arms, it's a bit like the chicken and egg question so we tend to revert to our reference books.

In the case of the arms of Wright of Bickley, Burke's General Armory (which isn't always accurate but can be of immense use) informs us that the arms were confirmed on the 18th of December 1583  as being Argent, two bars Azure, on a chief of the second three leopards' faces of the first. A quick check of the Visitations MS confirms that in this instance Burke is right although Burke includes the details of a crest which are absent from the Visitations MS. All is well so far and we can rest in the knowledge that the arms as described by Burke have the authority of a confirmation at the Visitations - they are official. However, when we check what arms were confirmed to Wright of Bickley at the later Visitations we see a slight, although quite unsatisfactory, difference; the arms are recorded in the Visitations of 1613 as: Barry of six Azure and Argent, in chief three leopards’ faces of the last. The Visitations of 1663 don't assist us a there is no entry for Wright of Bickley. 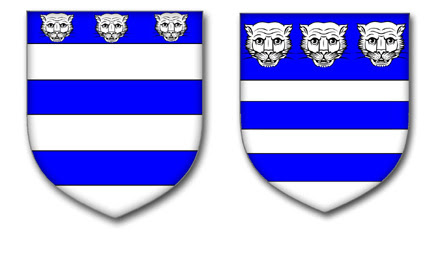 It's quite easy to imagine what happened. It seems to me that at each Visitation the herald was shown a visual representation of the arms and he interpreted the blazon; the same image has been interpreted differently - one correctly the other incorrectly. It can and does happen with predictable frequency. Technically speaking we are looking at two different coats of arms and yet both ought to be recognisable as Wright of Bickley. Too small a difference to make a difference? I know which one I prefer and if these were my arms, I would stick with the confirmation of 1583.