I'm always pleased to see armorial inn signs but too often today these signs tend to have no relationship with their armorial names. Two examples close to my own home have now, sadly, lost all connection with their armorial names; The Granville Arms now sports an inn sign upon which is painted a view of what appears to be a coppice of silver birch trees (your guess is as good as mine!) and the sign of The Swinnerton Arms is simply a painting of the pub itself. 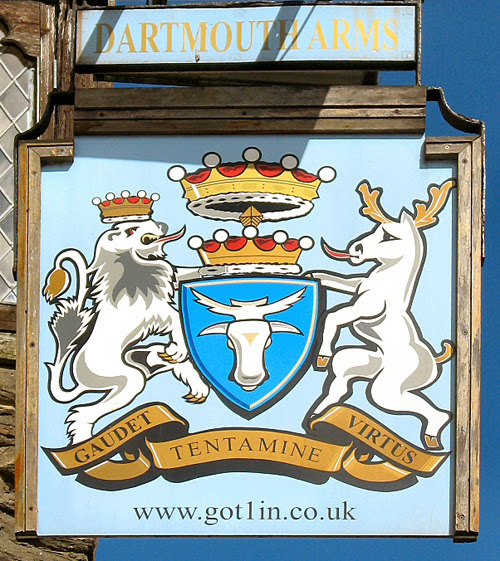 I was therefore quite pleased when I noticed an image of an armorial inn sign posted on an internet photo storage site however, upon close examination the painting itself, whilst not too bad artistically, is an heraldic abomination. The shield itself is about the only part of the achievement which could be awarded the accolade of being heraldically true to the blazon. The supporters seem to have lost their decoration; the lion should be semée of fleur-de-lis Sable and the stag should be semée of mullets Gules. To make matters worse for the poor lion, he appears to have collected the wrong head gear from the cloak room and been stitched up with the coronet of an earl instead of his own ducal coronet with five ostrich feathers. Come to think of it, the crest itself seems to have suffered the same fate; the crest of the achievement and the head wear of the lion should be identical.

For those who have an interest in the heraldically correct, I offer, without any pretensions to artistic quality, my own meager image along with the correct blazon: The Earl of Dartmouth