The Western Goostrey Bookplate (and a hanging) solves a problem

In the 2004 Autumn/Winter edition of The Coat of Arms (N.S. Volume XV Nos. 207 & 208) I wrote on the arms of Goostrey and their descent. I stated that my thoughts were based upon the arms passing through heraldic heiresses, which relies on an assumption that the Goostrey male line died out in the 14th or 15th century and I asked how then can we explain the continued appearance of the arms of Goostrey of Goostrey, co Bucks as recorded by Burke?

I stated, at that time, that there is reference to a Thomas Goostrey of Westminster gent. in Buckinghamshire at around 1749/50 (citing references from land transactions) but I could not conclusively prove that this gentleman was he who used the arms. I conjectured that perhaps someone had a fondness of history and adopted and continued to use those arms which were historically associated with the surname.

I have continued to look for proof, in some form or other, of who it might have been who used, quite without authority, the arms of Goostrey in more recent times; I now think that I have solved the puzzle.

Whilst idly browsing through  the volumes of Franks bequest : catalogue of British and American book plates bequested to the Trustees of the British Museum by Sir Augustus Wollaston Franks (1903), my heart leaped when I found an entry for Charles Western catalogued as:

I have requested a copy of the Bookplate from the British Museum but so far, they are playing hard to get so, in the mean time, I have emblazoned the arms. 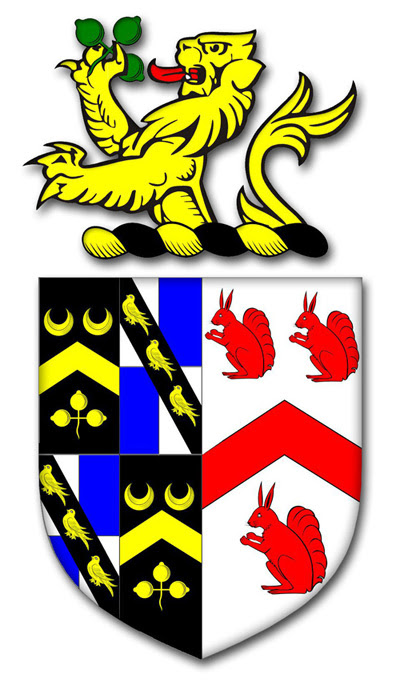 The armorial bearings illustrated on the bookplate of: The Revd Charles Western rector of Kingham.

William Goostrey R.N. was the brother of the earlier mentioned Thomas Goostrey and they both have quite a story to tell. HMS Cambridge formed part of Sir George Pocock's fleet at the taking of Havana from the Spanish in 1762. During that action she, HMS Dragon and HMS Marlborough were ordered on 1 July to bombard and capture the Moro Fort. Cambridge's captain, William Goostrey, was killed by rifle fire from the fort and John Lindsay - then captain of HMS Trent - took over command whilst the battle was still in progress. Cambridge’s eventual casualties were 24 killed, including her captain, and 95 wounded.

Captain William Goostrey's daughter, Mary Peniston (Pennystone) Goostrey married Charles Western and it is he who impaled the Goostrey arms with those of his own. Did he do so because her father used those arms, or did he do so because he wished to give the impression that his father in law was armigerous by "borrowing" the Goostrey arms? Perhaps, unless I can find other examples of William or Thomas actually using the arms, it will remain something of a mystery but it is interesting to note before we close that William's brother Thomas is well documented too.

Thomas was by profession an attorney at law and he briefly acted as agent for Laurence Shirley, 4th Earl Ferrers, who was the last member of the House of Lords to be hanged!

Ferrers stood trial by his peers for the murder of his steward, Johnson, and conducted his own defence based upon a plea of insanity. During the trial Thomas Goostrey was called, by the earl, to give evidence of this insanity and the whole account is set down in great detail in the book "A complete collection of state trials and proceedings for high treason and other crimes and misdemeanors" .