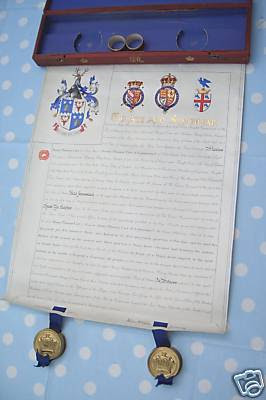 Described in the heading, by the vendor, as a "fine King George V grant of arms & seals in box" and further described thus:

This magnificent hand painted and written document is in the original box with both original wax seals attached. The document is a bestowal of the arms to Henry Thomas Cart de Lafontaine in 1914. The velum document has three superbly painted coats of arms in the upper right corner. The red morocco leather covered box has the cypher of King George V impressed in guilt and has a tooled border. The box is scuffed and scratched in places. Box 56cm x 14 Document approx 50 cm x 75 cm. A lovely original piece of history in good condition."
at December 26, 2008

Remember Remember the fifth of November ..