An outing to Staffordshire.

Wednesday 13th August saw a respectable contingency of Cheshire Heraldry Society members gather together for a border skirmish into neighbouring Staffordshire. The trip was ably organised by member Philip Hind who did a sterling job in contacting the officers of six churches in relative close proximity to each other to arrange for what was in all cases a hospitable reception.

We were due to meet up at 11a.m. at the Church of St. Mary the Virgin at Ingestre. The church leaflet describes it to be "the only parish church outside London attributed to Sir Christopher Wren. Although documentary proof is lacking, architectural historians acknowledge this jewel hidden in the Staffordshire countryside as Wren's work". I am no expert on the work of Wren but I can certainly attest to the fact that the church is a hidden jewel; I was almost an hour late for the start of the tour, partly because I had been slightly delayed at the start of my journey but mainly because the church was, for me at least, a well hidden jewel! [Note to self - did you notice how everyone but you had a Sat Nav?]

I arrived as everyone else was leaving and so had but few moments to look around the church and absolutely no time to take any photographs before the rest of the pack were away. Now that I have found this "hidden jewel" I shall certainly return at my leisure to take more note of the splendid memorials to the Chetwynd/Talbot families (the earls of Stafford).

After an adequate but perhaps not altogether leisurely lunch at a local garden centre (we were already falling behind in our schedule!), where I did manage to exchange conversation heraldic with fellow enthusiasts, we moved on to our next venue, All Saints Church Sandon, slightly late for our 1.30p.m. appointment.

Said to have been founded by the baron of Malbanc, the vicars of the church are known from 1311 when the patron was bishop of Lichfield. There is some splendid heraldry in this church and the gentleman who showed us around, although not knowledgeable in heraldry, was well versed in the family histories of the patrons. Of particular note in this church are the arms of the sons of the various earls of Harrowby whose cadency marks are differenced individually with charges from their mother's arms. 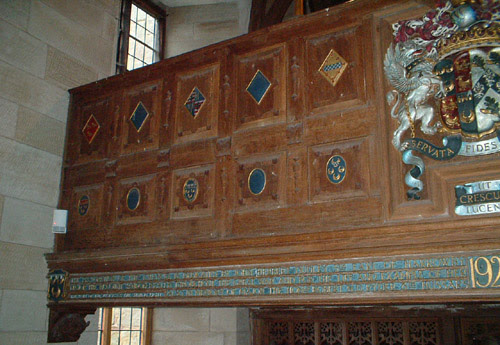 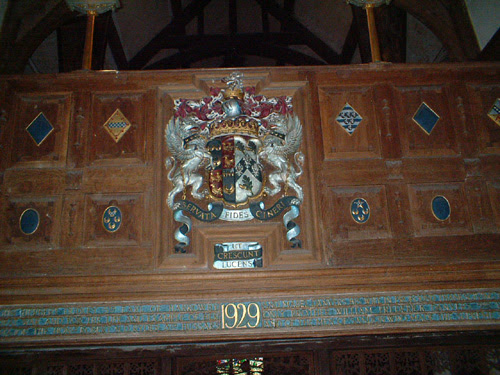 There is also a wall painting of the family tree of Sampson Erdeswick, a colour reproduction of which was produced by JR Fernyhough, the Staffordshire antiquary who died in 1603. This coloured reproduction is reproduced here (courtesy of the William Salt Library) below a photograph of the real thing. 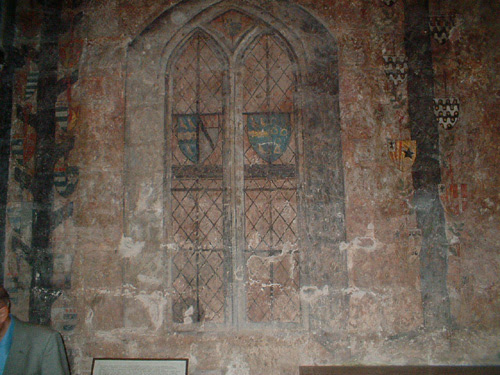 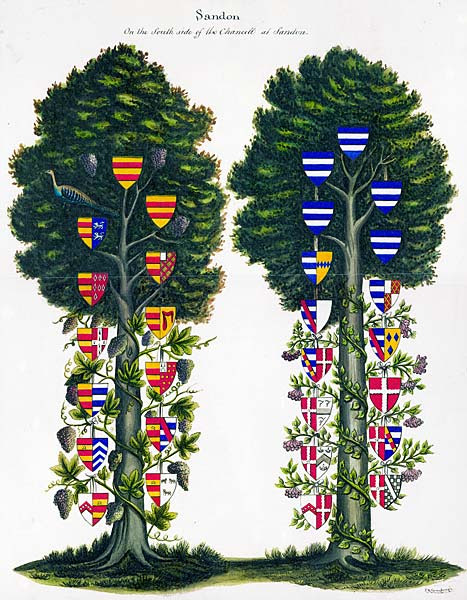 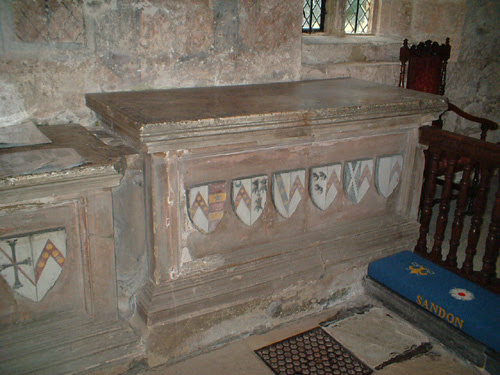 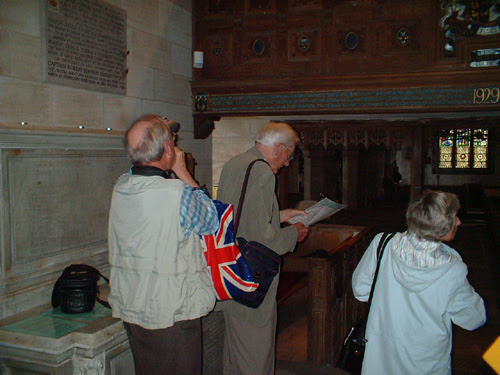 Our next appointment was at 2.30 p.m. where we all once more assembled together at Holy Trinity Church Eccleshall which is the final resting place of several bishops. 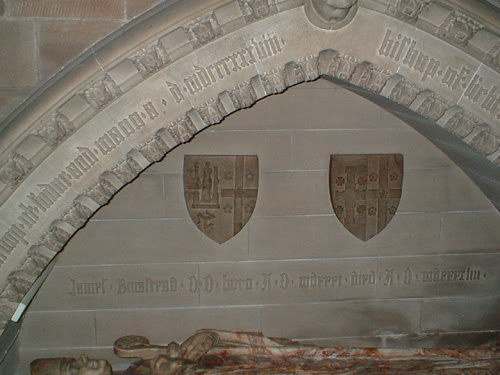 It was here that eagle eyed Mike spotted an armorial fau par in the depiction of the arms of Queen Victoria; drop me a line if you can't spot it. 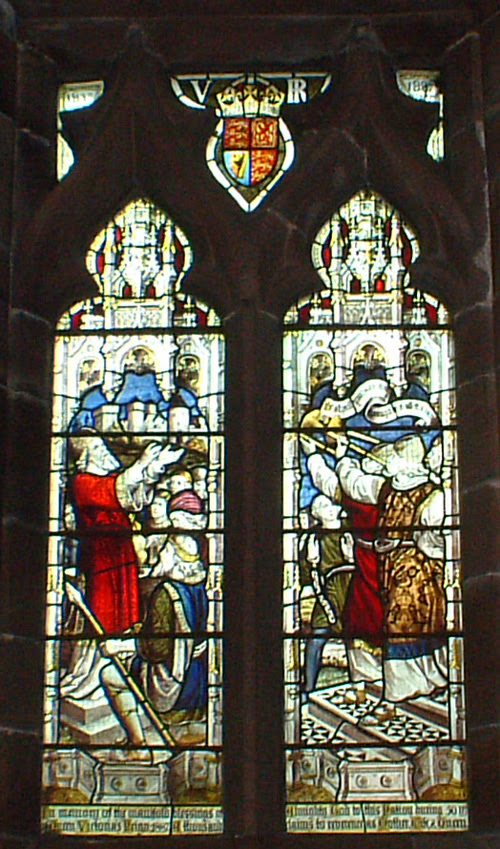 Time pressing and with our next appointment at 3.30 p.m. we moved on to the delightful and heraldically pleasing church of St. Peter at Broughton. This one was bursting at the seams with Cheshire heraldry well known to all of us in the form of the Broughtons of Broughton Hall who married into many Cheshire families including the Delves. It also had a mystery in the arms of its last patrons, the Hall family. The arms displayed in this splendid window clearly show those of the patron quartered with those of his mother and bearing an escutcheon of pretense of the arms of his wife. They tell a genealogical tale of their own but only genealogy (or an expensive enquiry to the College of Arms) can tell us who the arms on the left and right windows represent. 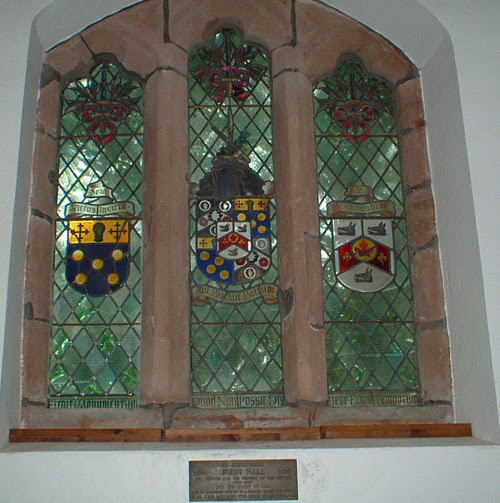 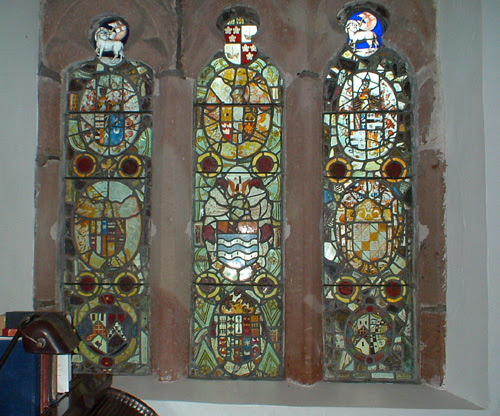 Finally onto St. John Baptist Church Ashley at 4.30 p.m. from whence, after a general relaxed chat amongst ourselves, we dispersed. 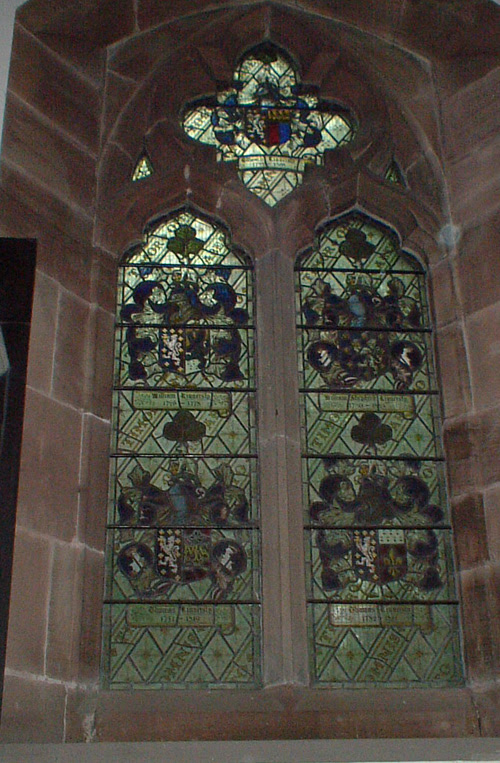 My report is but brief and features all too few photographs but I hope it gives a flavour of a day well spent amongst friends who share a common interest. My thanks must once again be given to Philip who organised it all so well; I look forward to the next time.
at August 17, 2008