I am always pleasantly surprised when I come across any armorial connections with Cheshire and this week has proved no exception when, whilst emblazoning the arms of the Gunpowder Plotters for a PowerPoint presentation I am preparing, I found that the family of Wintour quartered the arms of both Keveliok and Lupus in the arms recorded in the Visitations of Worcestershire for the year 1569.

In addition, quarter 5; Gules, a lion rampant Or, is recorded in the Winter (Wintour) achievement as belonging to Dabigney (d'Aubigny Earls of Arundel); this is also the coat of Randolph Gernons, fourth Earl of Chester. 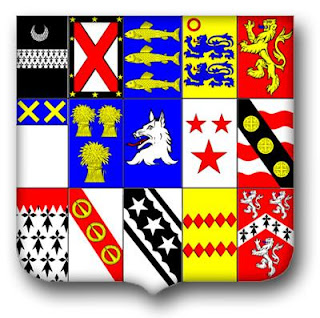 Robert Wintour was executed on 30 January 1606 at St. Paul's Churchyard, together with Sir Everard Digby, John Grant and Thomas Bates. On the scaffold, he was quiet and withdrawn, and did not speak much. Although he appeared to be praying to himself, he did not publicly ask mercy of either God or the King for his offence.