What a beautiful spring day Saturday was; perfect for an indulgent day of heraldry for any armorist.

I set off quite early in my journey to Macclesfield, destination The Cheshire Heraldry Society lecture to be given by Major Ian L Riley TD FSA Scot, because I wanted to photograph a pub sign at Scholars Green and also thought I might, if I had the time, take a couple of snaps of the coat of arms magnificently displayed outside Macclesfield Town Hall. 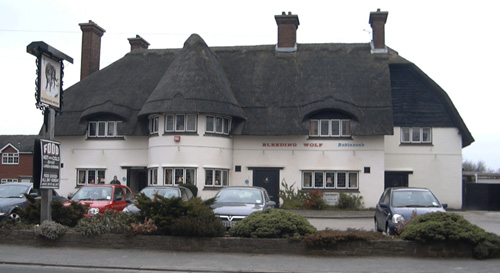 Everytime I make the Journey from Shropshire to Macclesfield I pass the rather splendid looking pub called Bleeding Wolf and it is its pub sign which first caught my eye. The sign itself is not in any way heraldic and yet, perhaps unbeknown to its patrons, the very name of the pub, and hence its sign, owes its origins entirely to heraldry. 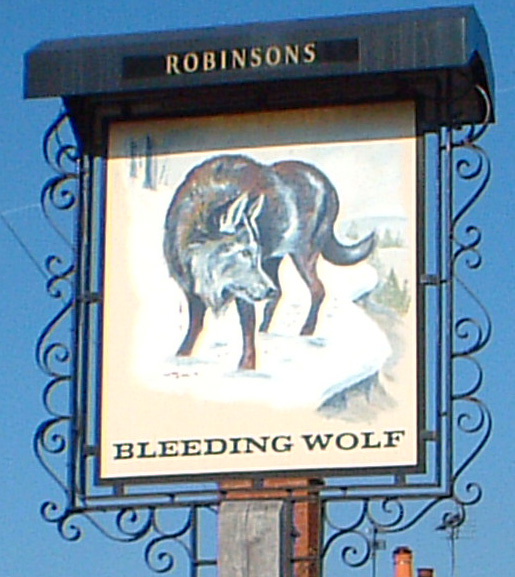 It is recorded that the lands of Lawton were given to Hugh de Mara, (sometimes known as Hugh Lupus or Hugh the Wolf) by his brother-in-law, William the Conqueror in gratitude for his support in the invasion of England in 1066 and it was here that he built the Norman Church which replaced an existing Saxon one; hence the name of the settlement Church Lawton. There is a legend that Adam de Lauton (temp King John and King Henry III) rescued the Earl of Chester from an attack by a wounded wolf and by way of thanks was granted a thousand acres of land stretching all the way from the town of Congleton to Sandbach. This legend is clearly commemorated in the armorial bearings of the Lawton family. (Scholars Green borders Church Lawton and is within the bounds of the Lawton estates). 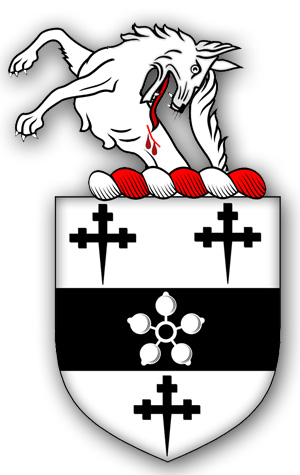 Lawton of Lawton
Arms: Argent, on a fess between three cross-crosslets fitche Sable, a cinquefoil of the first, pierced of the second.
Crest: A demi-wolf salient regardent Argent, vulned in the back Gules, and licking the wound.
[These arms and crest were granted by Robert Cook, Clarencieulx by l'res patentes Dated 14 R. Elizab., 1572]

I have commented before that these arms differ between Visitations and in the 1613 visitation they are recorded as:


Lawton of LawtonArms: Argent, on a fess between three cross-crosslets fitche Sable, a rose Argent

Crest: A demi-wolf regardent Argent, vulned in the breast Gules.

Having taken a photograph of the Bleeding Wolf, I made my way to Macclesfield and onwards to the Townley Street Schoolrooms via Macclesfield Town Hall and a stop off for a late lunch in the grounds of St. Michael & All Angels' Church, which is in itself of interest to armorists. 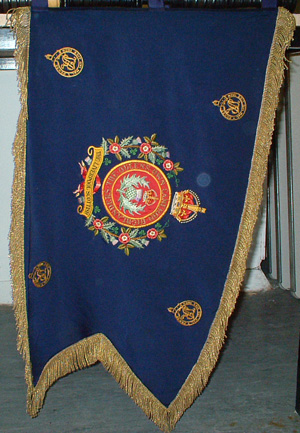 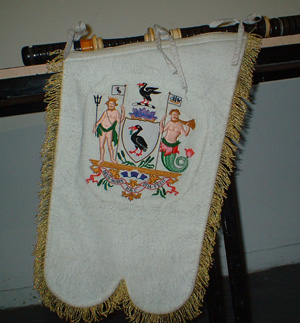 Our Chairman being unavoidably detained (traffic diversions and delays made him a tad late), the meeting was Chaired by John Titterton who introduced our guest speaker, Major Riley, with the enthusiasm of a fellow scientist. Major Riley, who is The Honorary Secretary to The Regimental Museum of the Liverpool Scottish, proceeded to give us an entertaining and informative illustrated talk on what is undoubtedly one of his favourite subjects; Heraldic Pipe Banners. Not only were we treated to a comprehensive and well illustrated PowerPoint presentation, Major Riley had been kind enough to raid the Museum exhibits for our benefit and bring along a number of actual pipe banners. When he introduced himself, Major Riley very modestly apologised for his lack of expertise in heraldry stating that he was more comfortable with military matters. He need have made no such apology and throughout the lecture he amply demonstrated that he had a thorough awareness of the art of blazon and was more than acquainted with Lyon Court guidelines on the various forms of flying heraldry (which he maintained in the case of military pipe banners were observed more in the breach!). 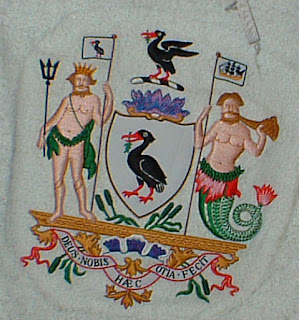 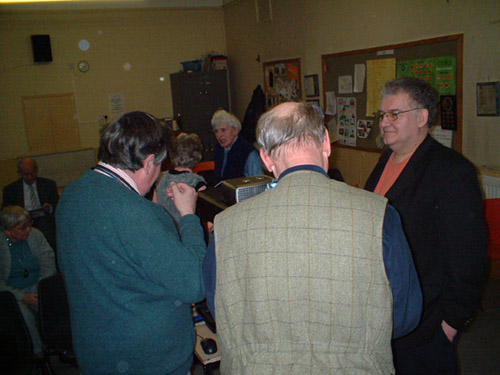 I bit my tongue and remained silent when, during his explanation of who might be entitled to how many pipers, he referred to Lyon Court guidance which makes mention of "Peers and Feudal Barons" and he stated that he "had no idea what or who on earth that curious being - a feudal baron was!" I'll leave him to his blissful ignorance on that one.

His talk was so informative and interesting that the time flew by and as he drew to a close he mentioned that he did have more to show us if we had the time and the inclination. Our host for the day, John Titterton, informed him that as those who were asleep would not notice and those who were awake wished to hear more, he saw no reason why the speaker should not continue. I can assure you that there was no one in the room who was not fully awake and wanting more. I would be very surprised if Major Riley did not now receive invitations to give his talk much further afield ..... North Britain springs to mind as being an ideal venue for such a topic.

Major Riley (left) talking to Society Members Mike Thompson and John Titterton (unfortunately taken from behind - I was going to take a photo from the front but found that I had used all the memory card and it was too much of an agonising decision to delete one to make room!)