Even Heralds can get it wrong!

Nothing really to do with Cheshire but of interest to armorists nevertheless.

I have been involved in a conversation elsewhere in regard to an exemplification of arms by Deputy Ulster King of Arms - extract below [click on the image to enlarge it] :

The blazon for the crest in the exemplification gives the crest as "CREST: an arm erect in armour couped at the wrist or, the hand proper".

I find this a strange blazon given that the family is said to have used a crest which is simply a hand couped at the wrist. The blazon above would seem to me to be an arm chopped off at the wrist with the addition of a hand ! The gentleman I am in conversation with has provided (on the original thread) photographs of a stone carving of the arms which clearly show a hand only!
I have illustrated said blazon thus: 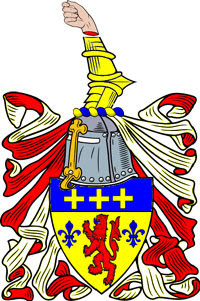 Not at all a satisfactory crest as the hand is floating above a severed wrist.
It is my belief that Deputy Ulster got it wrong; what he meant to blazon was a hand couped below the wrist.
at October 16, 2007